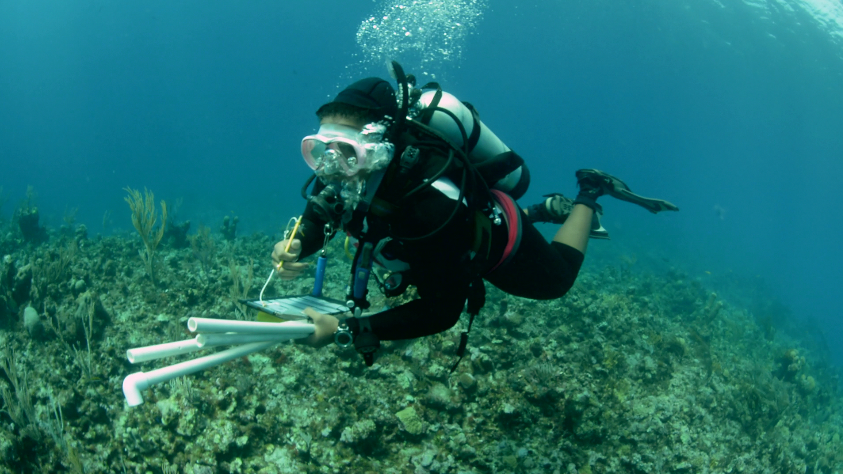 Sometime when she was thirteen, she toyed with a conundrum while working her first summer job: we’re making money from the environment, yet we’re destroying it. A young scientist exploring the ocean and all the wonders it holds, hoping to find a way to earn some money and, uncovers instead a way to unite the sea with the people around it. To say that is the precise moment her enthusiasm began would be a distortion of the truth, because it was innate. A Bahamian of both Irish and Bahamian descent, the soft sand, yellow elders and limitless cerulean sea always magnetized her. And that is how she has lived her life – channeling those things that captivate her and using them to educate those around her.

For the past seven years, Nikita Shiel-Rolle has been at the helm of Young Marine Explorers – a non-profit organization forged to provide transformational, environmental experiences to Bahamian youth. She founded the organization in the midst of her undergraduate studies at the University of Miami, while working with a researcher, publishing a photography book – Islands of the Sun: A Tribute to Northern Exuma Keys, and being involved in a National Geographic Expedition on Bahamian blue holes, which led to her certification as a cave diver. She explained, “doing all those things, that’s when I started Young Marine Explorers (YME), back then it was called Young Bahamian Marine Scientists (YBMS), and I was traveling back and forth between Miami and Nassau to try to start off these programs.”

She continued this throughout her undergraduate career, after which she returned to the Bahamas to focus her attention solely on the organization. During this time, she parted ways with her mentor, and made the decision to change the organization from YBMS to YME – “the idea of changing the name to YME gives us the ability when we are ready to expand to other islands and countries throughout Caribbean and the region.” She also shifted the focus of the organization from a primarily environmental organization to an organization that “uses the environment as a medium to build leaders and really develop citizens. And part of developing citizens means really improving their academic performance.”

To emphasize the organization’s new focus, Nikita designed a three-year program for high school students that intertwines the high school curricula for biology, math, language arts and geography with an environmental education curriculum. These years include: the year of the ocean, the year of biodiversity, and the year of sustainability. “The idea is when students are participating in our program,”  – two hours after school and five hours in the field on Saturdays – “they may have to calculate percentages which relates to math or [they] may be working from a map, which relates to geography. It connects [with] what they need to know for school. Doing it through this experiential learning activities reinforces what they need to know to pass the exams.”

While molding and developing YME, Nikita completed a Master’s degree in Biodiversity, Wildlife, and Ecosystem Health from the University of Edinburgh in Scotland and a fellowship with the Zoological Society of London. At the former she focused on the main causes of environmental degradation in the Bahamas, one of which she discovered to be a lack of education about the importance of the marine environment. While her work with the Zoological Society of London targeted coral conservation, specifically the endangered pillar coral. She explained, “how I approach conservation is very people centered because I understand that you can’t just study the corals and try [to] solve the problem by the corals alone because the people really are the ones who are causing problems for the corals.” This understanding has contributed to her evolution as a scientist and a professional – she continued, “I figured I could train these groups of citizens on the different family islands to be able to monitor the health of coral reefs around their islands. With the idea that they monitor the health of these coral reefs, [and] that information they gather can then be compiled into an annual status of the reef report that can then be sent to policymakers and the managers as baseline information to monitor our natural resources, how healthy they are, and what the trends are.” The Natural History Museum of London discovered her efforts with her Youth Coral Conservation Team – a subset of YME – flew to the Bahamas for ten days in December, and compiled a documentary chronicling her conservation work. An extended version of the documentary will be released for World Oceans Day on June 8.

These achievements highlight the progress that Nikita has made in ocean conservation through YME, but it has only motivated her to work harder to improve herself, the organization, and the community around her. YME now has a two-year internship program, which allows students to work in the field, and in return receive tuition to attend Miami Dade Virtual College. Upon completion of the internship, participants will earn an Associates’ degree. “The goal isn’t to develop scientists, but rather to develop engaged citizens and Bahamians who are in a position to move the country forward.”

While she hopes to expand to other islands within the Caribbean, she is patient and determined to find the right formula before embarking on that goal. “What I think makes this program unique and why it’s so successful is it’s culturally relevant to the Bahamas, so when we expand to the other Caribbean islands, it will not just be a matter of copy and paste, we’re going to have to work closely sort of using this model but with people on the island to develop a program that is culturally specific to that region.”  However, she explains that there are small changes everyone can make that will have a positive impact on the environment. “If you are far removed from coral reefs, then it’s true why bother. But it’s also important to realize the oceans help regulate the amount of carbon dioxide we have and that impacts everyone. The most important thing [people can do] is to try to be sustainable in their lifestyle – stop using plastic bags – so many plastic bags get into the ocean, turtles eat it and that can impact ecosystem stability. Try to reduce the use of plastic – carry reusable grocery bags, or water bottles.”

Nikita has charted her own course, and explored the path that was most inherent her happiness. She believes  “being confident in your abilities and believing in yourself are paramount to being successful because along your journey sometimes people don’t understand your vision especially if you’re writing your own path. There’s a large stage where people don’t understand where you’re going and they think you’re crazy.” Fortunately for Nikita, she has taken all the little eccentricities, experiences and chances and used them to guide her into her destiny. “It’s my ocean” is proudly graphed on her left arm, while “an Islander’s strength, love, determination” are written in Irish on her right. Both symbolize her love for the ocean and the two islands that have most impacted her life – Ireland and the Bahamas. When asked to describe her other passions, she laughs hesitantly: “it’s funny, being in the ocean and taking pictures are pretty much my life. But other than that, I mean…I like reading. I would say those are kind of simple.”

Green iguanas are prevalent in many islands of the Caribbean. Their presence has made them both a nuisance and a delicacy. In some islands...
Arts + Entertainment

The origins of Trinidad + Tobago’s Carnival can be traced well into the eighteenth century, where French plantation owners would host elaborate celebrations and...