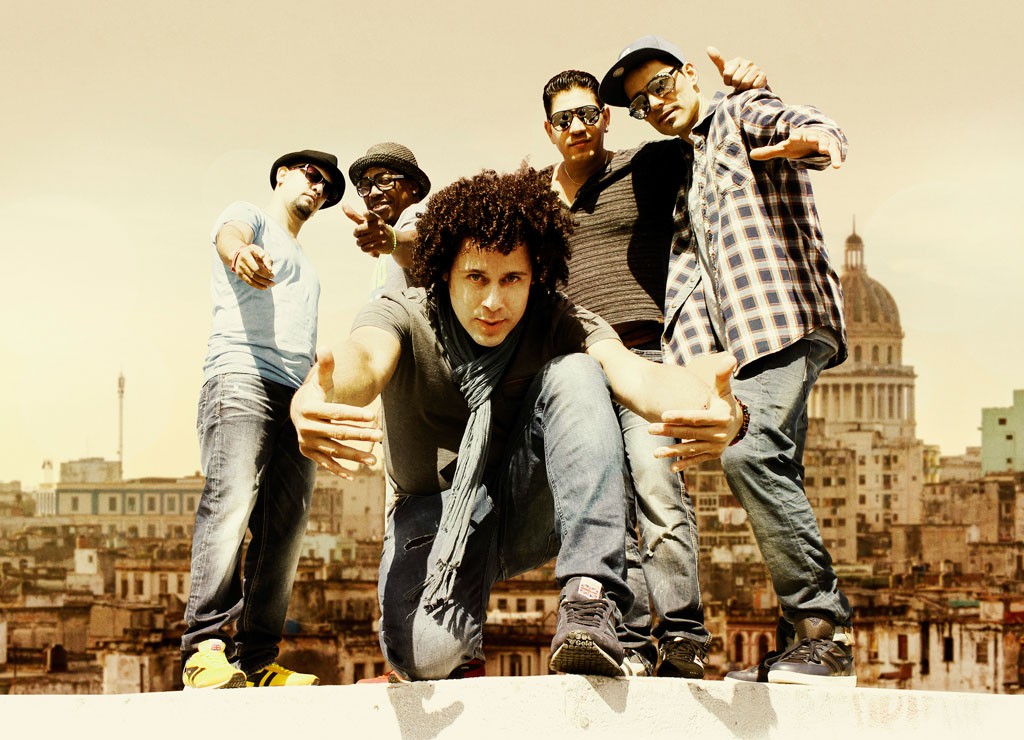 Combine a pinch of magic, an ounce of determination, a cup of friendship, with a ton of musicality. Mix it all together into a pot steaming with Amerindian Taino, African, Asian, and European culture. Add just a dash of hip-hop – and you have just started to stitch together the essence of Cuban Beats All Stars (CBAS). Born in the capital city of the largest island of the Caribbean, CBAS encapsulates the diversity of experiences that exist in Cuba. They have used their music to narrate personal stories, whilst capturing the beautiful, unique eccentricities of Cuban culture.

CBAS was forged from the remnants of the now defunct band – Orishas – which was created in 1999 to energize the youth, establish black identity and incorporate American rap culture in Cuba. After accepting a European record deal, years of touring across the globe, and firmly establishing their place in musical history, the group disbanded in late 2009. Sometime after the disbandment, musician and former member of the Orishas – Vladimir Núñez – approached the former DJ of the Orishas, DJ Tillo, with the idea to continue making music together. Núñez explained, “we formed the duo and called ourselves the Cuba Libre camp, but we felt the need to go beyond that. We [spoke] to Nelson Palacios, who was the bassist for the Orishas and the trio was formed. That’s when the story of the Cuban Beats began.” As a trio, the group completed two tours throughout Latin America. Immediately after, they invited their friend and former emcee of the Orishas, Hiram Riverí (Ruzzo) to join their project. Together they collaborated with Roy Pinatel, and these five pioneered a fresh, new style of music, which they describe as “fusion de musica”or fusion music. It is a form that creatively combines various genres of music – including hip-hop, electronic, salsa, and traditional African sounds.

When describing the purpose behind this specific style of music, Núñez said, “As time went on and we started incorporating more people to the group, they brought something new to the group. Each time we imported something new to the sound [and] started to fuse the new musical sounds that each member brought to the group. Thats why we like to say that our music is a fusion.” Each member of CBAS introduced their own idea and styles of music to ensure that the sound would be dynamic and powerful. He continued, “Tillo imported his ideas of electronic music, Roy [and] Nelson brought the Cuban sound, Ruzzo brought rap, and I brought jazz and the Cuban rhythm.” It is this unity of sound that makes their music distinct, multi-generational, and influential.

La Cuerda, one of the songs from their forthcoming album – La Receta – perfectly describes the kind of impact they hope their music, and Cuban music as a whole, will have on the world. Núñez explained the meaning behind the message of that song, “for many years, our music – the Cuban music – hasn’t had any importance worldwide, by our standards. Our culture hasn’t had any real impact worldwide. But now, in this present moment, time is moving forward and our culture is evolving. It is being enriched with our movement and the world is getting to know Cuban artists and Cuban music.” The song details the cultural exchange that is happening with Cuba and the United States, and the ways in which it is changing the music and culture, globally. He clarified further, “before Cuban artists were not allowed to travel to the U.S. and American artists were not allowed to travel to Cuba. This cultural interchange has allowed for great change and we applaud this. This was an inevitable evolution, that’s why we sing ‘Habana cambia la cuerda (Havana changed the rope).’”

Though CBAS is primarily located in Europe – the band members are living in Spain, France, or other countries on the continent – Cuba has not left their minds or hearts. Many of the members travel there quite often. Speaking for himself, Núñez detailed his love for the island, the city of Havana, and the town of Palma Soriano in the providence of Santiago de Cuba, where he was born – “there, I can find a great sense of peace, there I can truly find myself.” Their love of Cuba and music is palpable in their lyrics and rhythms; and is an integral ingredient in the longevity of the band and its sound; Núñez expressed, “I think people will see that we put our hearts in it.” They want their music to firmly establish them and their home island as energetic, strong contributors to the global music industry.

CBAS’ music is available for purchase on iTunes and Amazon, and for streaming on Spotify. Their new album will be released on June 5, 2015 to select stores in Europe.

ABOUT US
Twenty8+ is a distinct voice for the twenty8+ island nations of the Caribbean, their Diaspora, and the lifestyles surrounding them all.
Contact us: editor@twenty8plus.com
FOLLOW US
© Copyright 2020 - Twenty8+ Magazine
MORE STORIES
Society + Culture

As America celebrates 239 years of independence, everyone is aware of the importance of the date. The fireworks, barbecues, and festivities that occur in...
Arts + Entertainment

World-renowned British DJ, Gilles Peterson, has had a long-lasting relationship with Cuba and its dynamic culture. Peterson - who became infamous because of his...