From capturing young models camouflaged between tall blades of grass, recreating the famous Biblical scene of Eve in the garden entranced by a snake and a luscious red apple, or simply documenting the unexplained, often missed glances exchanged between lovers – the Scharad Lightbourne experience is best chronicled as an endless multidimensional journey. Even that doesn’t do his artistry much justice. One thing is undeniably evident – his unparalleled mastery of the lens is tangible; as he slowly reels the audience into his images, in a precise, calculated, yet brilliant way. 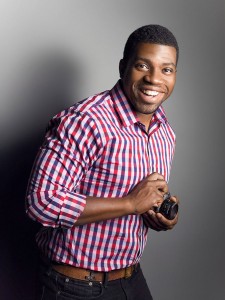 As an artist, it can often be difficult finding and settling into a niche, especially when there is a love for the exploration of various aspects of creativity. During college, Lightbourne dabbled in an introduction to photography course, but beyond that, focused entirely on his Graphic Design major. Born and based in the alluring Bahamas, Lightbourne is a self-taught creative photographer who enlivens his images beyond simple stills. In many ways his photographs are comparable to short, silent moments that are rarely, if ever, captured. Perhaps it’s this organic approach to his craft, that make it so original – he has taken photographs of celebrities to the often ignored man on the street corner, without ever missing the positive, significance behind each individual. He described what he believes makes his work so distinct, “I think I tap into markets people can relate to. I find that my imagination and creativity help people to relate and attach themselves to my work. They can see themselves in my themes and subjects, and imaging themselves as the model. It really makes them want to be apart of the stories I tell.”

The tales narrated through his images unearth the raw, undiscovered beauty that rest beneath the simple, mundane moments of life. A characteristic of his work that can be attributed to his close attention to detail when finding creative inspiration – “I can pull from anything to find inspiration, I just open my eyes to see a bit more.” His cultural heritage is also a constant source of inspiration, as he explained, “my work is a by-product of my environment. The Bahamas’ people and its culture are things which directly influence my work.” He describes his style as “clean, colourful [sic], creative, concise, and expressive,” all traits, which he ascribes to the Caribbean people.

However, his jaunt to photography has not been without its challenges. The greatest of which he stated as trying to get people to understand that “photography is an art, where you specialize in different mediums.” He spends a fair amount of time educating others on photography and teaching the skills he has learned along the way. A lot of people may not understand that education on photography not only as a business, but also as a creative art form, is an integral part of the Lightbourne brand and speaks volumes of his giving nature.

In addition to inspiring others and working on effectively retelling the stories of his subjects, Lightbourne has a witty, down-to-earth personality that he involves in his work. When asked about his ideal subject, he quipped “I find many people interesting, but if I could photograph one person, it would be Eva Mendes. She’s one of the world’s most beautiful women so I imagine shooting her somewhere foreign and exotic. Wait…are you asking me because you’re going to grant me this one wish?” It is this light-hearted side, that his friends, clients and colleagues can surely appreciate.

Beyond it all, however, the man behind these gripping, awing photos only wants to leave a legacy that impacts others. He explained, “As a photographer, I just want people to look at my work and say, ‘yeah, his photography inspires me.’”

On the road in Jamaica

On the road in Jamaica

The recent "eat local" trend in the United States has spread faster than wildfire because of the rise in health ailments, the use of...
Fashion